The Introduction of Radium into the World of Watches

The luminous property of the element radium was already known long before it was used in clocks, watches and other instruments. Pierre and Marie Curie discovered radium in 1898 and Marie also discovered that radioactive radiation could make materials glow.

William Hammer was the first person to combine radium, zinc sulfide and glue into a luminous paint. Dr Sabin Arnold Von Sochocky developed the first commercial luminous paint. This paint named ‘Undark’ was a mixture of zinc sulfide and various forms of radioactive radium. It was marketed in 1917 by the Radium Luminous Material Corporation. The name was later changed to 'United States Radium Corporation'. 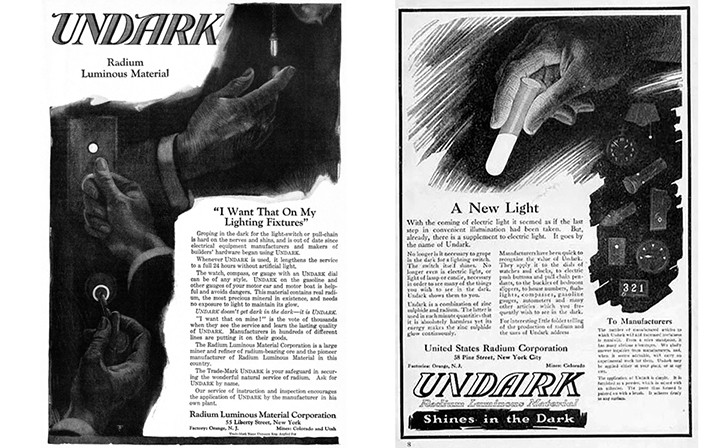 The army was the first and also the largest customer of radium-lit products. By the end of World War I, the United States was producing over four million watches with illuminated dials for military use. The non-military market soon followed. Numerous novelties flooded the market in the years after the world war. Not only watches and other instruments but also fishing bait, crucifixes, light switches and countless other applications. By 1970 it was estimated that there were more than ten million clocks and watches in circulation with radium-lit dials. Today, 90% of all watches have luminous hands or dial.