Whether you love them or hate them, green watches are hot. Surprisingly, this hasn’t always been the case. Today, many brands try to experiment with the color green in their own way. Just a few years ago, green watches were as uncommon as red, orange or purple watches are today. They were more seen as a gimmick than as a watch to wear on a daily basis.

Today, we are going to see which watches had a great influence in making the color green mainstream in watchmaking.

The 16610LV ‘Kermit’ was released to celebrate the 50th anniversary of the Submariner in 2003. Even though the latest 126610LV is the only model that is still in production, all three reference numbers are very popular today and highly sought after.

Another Rolex that has played a huge roll in the mainstream popularity of the color green is the 116508 Daytona, known as the ‘John Mayer’ Daytona.

The watch was released in 2016, together with the stainless steel 116500LN Daytona’s. These steel Daytona’s were such an immense success that they stole all the attention. Meanwhile, models like the yellow gold case with green dial 116508 and white gold case with blue dial 116509 were completely overshadowed. It was until John Mayer claimed in a Hodinkee video in 2019 that he believed that these watches were underrated and that they could be ‘the next big thing’. A few days after the release of the video, the watch became unavailable at retailers and the value of the watch instantly shot up.

Rolex often uses green with their ‘celebrational’ models, where a green dial or bezel is added to an existing model. Think of the 117618LN GMT Master 2 green dial, the olive green Day-Date 40 and the above mentioned 16610LV Kermit.

Panerai is a brand that definitely shouldn’t go unmentioned.

The Panerai Luminor with bronze case and green dial, aka the ‘Bronzo’ was a huge hit when it was released. When people were accusing Panerai that ‘all their watches looked the same’ they responded with the bombshell that was the Bronzo.

A fully bronze Luminor case with a green dial was the right way to refresh their image. Today, bronze is commonly used material in watchmaking, but in 2010, a bronze case was a fairly ‘new’ thing, and green dials were just as rarely seen on sports watches.

10 years later, Panerai offers a large variety of bronze Luminors, as well as a beautiful selection of olive-dial Radiomirs.

IWC has had a few home runs while experimenting with green as well.

IWC doesn’t focus on one certain model or one particular shade of green, but they try to experiment and try different variations.

A few examples: the Spitfire IW326802 and Spitfire dual time zone IW327101 have a bronze case and matte khaki green dial. This gives it a very casual and sporty look. The Pilot Chronograph IW377726 on the other hand has a completely different vibe. The watch has been given a steek case and a ‘Racing Green’ sunburst dial with the classic chronograph layout. This gives it more of a classy, race style vibe. 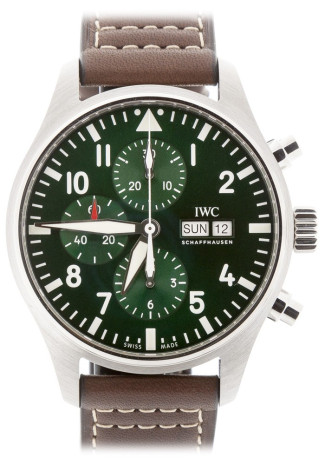 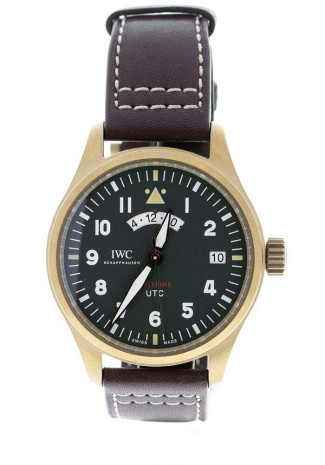